Before I was “that in-law” at the Thanksgiving feast toting her family’s own nutrient dense turkey leftover casserole, before a niece studying to be a nurse stated that my wonderfully probiotic healing kombucha fermented by a combination of good bacteria and fungi sounded scary, before I met blank stares when throwing out the shocking statistic that gut microbiota/flora makes up about 90% of all cells and genetic material in the body as effectively depicted in this NPR animation,

and before the last thing I imparted (only when being asked about cholesterol) was that high cholesterol is a man made disease created by the pharmaceutical companies to sell dangerous, but profitable, drugs prior to receiving the verbal and figurative hook around my waist of “it’s time to leave” meaning I’ve said too much, I was clueless too.

Before I went to bed each night with homemade sour cream on my face and a written question on a folded piece of paper in my sweatpants’ pocket on what I’d like my dreams to answer (incidentally, my question this night was for blog post ideas that led me to waking up at 4:30 am to write this one), before I was even going to a farm to get raw milk from which to skim the cream off the top to make homemade sour cream, my goal was to use a highly processed can of cream-of-whatever soup at every meal. Out of my mouth came the now shutteringly horrific proclamations that Rice Krispie treats were nutritious because of the cereal’s fortification of vitamins and minerals and that eating at McDonald’s couldn’t really harm your health. You know, if it wasn’t every day. Let’s be sensible, everything in moderation, right?

Before I was a GAPS™ practitioner, before the healing broths, ferments, and juicing of GAPS, before I and my six children collectively overcame autism, dyslexia, dyspraxia of speech, OCD, ADD, anxiety, asthma, skin conditions, and hypoglycemia, before I even had six children, I was a binge eater. Sometimes the only thing (because you can’t call it food) that I ate for days at a time was Oreo ice cream, consequently having constant diarrhea, but shockingly never making the connection. Sometimes I still binge, like yesterday. All I had was egg nog kefir, two yummy raisin cookies with homemade sour cream, spicy chocolate kefir, avocado chocolate pudding, and crispy chicken skin with salt and cayenne pepper. I know, not the best, but not the worst either. The raw egg yolks (from happy chickens from happy farms, not from industrialized chickens) provided all the nutrients needed to make my neurotransmitters, the high fat sour cream, avocado, and chicken skin somewhat offset the blood sugar disregulating effects of the raw honey infused sweet treats, the probiotic foods (kefir and sour cream) gave my gut a good bacteria boost, and my binge did not result in diarrhea. Yesterday I nourished my family with wonderful homemade chicken soup, almond flour bread, and lots of butter, but somehow didn’t extend myself the same love. I’m a work in progress. We all are. 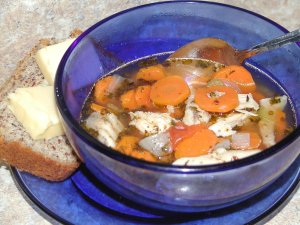 Before I bucked the low fat/no fat, high grain, salt limiting, highly processed, GMO food system, before I realized that our bodies have an innate ability to heal themselves when given nourishing, nutrient dense, real food, I surrendered my health to doctors. After all, doctors knew more than I did about my health. Doctors ranked in the same authoritative, never could I question, category as the all knowing entities of principals, researchers, and the so called “experts”. When presenting my symptoms of chronic diarrhea and severe hormonal mood swings to the medical profession, without ever discussing my diet, my microbiome, or my toxic exposure, I was put on Lactaid supplements and synthetic progesterone. Neither worked for very long. When suffering from recurrent Staph infections I was put on antibiotics almost consistently for one year, not long after that I developed MRSA, which came dangerously close to taking my leg and my life. Yes, antibiotics saved both my life and limb and for that I am truly grateful. But not one doctor connected the Staph and MRSA infections to my food intake, nor recommended probiotics, nor mentioned concern for toxins. You see, infections happen when the immune system is compromised. The immune system is compromised when the digestive system is compromised. The digestive system is compromised by starchy, sugary, processed foods, an imbalance of more bad microbiota/flora than good, and toxins.

Before I cried knowing the simple healing power of broth and butter of GAPS can effectively treat the conditions of autism, anxiety, arthritis, epilepsy, autoimmune disease, bi-polar disorder, etc., from which some of my friends and family (including my in-laws) suffer while they continue to follow their doctor’s prescriptions with limited success and harmful drug side effects, I cried because I knew not how to help.